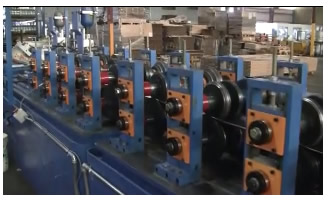 Fundamental to Industrial and commercial construction is the use of metal wall studs. Residential construction still principally uses wood studs, but some builders are moving to steel studs for that market as well.

Steel Stud Roll formers are the main type of machine for producing these steel framing studs. Also called stud and track rolling machines, a roll former can run at high speed and produce as much formed studs as is required.

Form process Engineering has produced stud and track roll forming machines for this application. A typical system would consist of:

A custom produced systems would likely wind up less-expensive than available models from other manufacturers.

We also can come to your location to troubleshoot issues with your Stud and Track roll former.
See Video of above image below.

System has side by side tooling to make drywall stud, drywall track and furring channel. Maximum line speed of 210 feet per minute!